This is written as part of BlogChatter Book Review program.

The book was sent to me by the author under this program for the review. 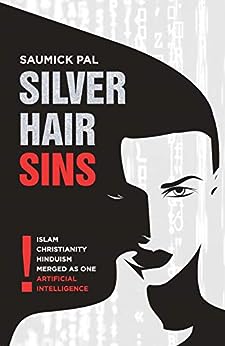 The story is set in future. Where the world is being completely taken over by technology, and even each individual’s thinking is being controlled by the tech and the team behind it.

The world as we know, is supposed to be changed by enormous leaps. Though is it for the better?

The story is set around characters which are doing something, yet declared as the role models of the future, with an entirely different backstory.

And thus the next generation sees the rape committed to the pioneer, Meera, as the ultimate form of sacrifice, when subjected to it voluntarily. And they also take up only the popularised and shallow versions of the ancient scriptures, which are completely ridiculous as the base idea was totally lost during the transition.

The story is supposed to redeem itself by showing that the idea behind the tech, resets the balance once in awhile. This part includes some good acronyms for Adam, Eve and Eden and also brings out the concept of Dasavatharam and / or the base fight of good over evil, where good wins eventually, but evil is never ever dead in the complete sense.

By reading the gist, the story might seem to be all in all on good note, but I’m afraid that, the narration doesn’t let you think so, while reading it.

I appreciate the effectiveness of the writer in making the reader captivating. Because for someone who isn’t new to dystopian novel, some sequences of the story makes me revolted. Guess there lies the success of a dystopian writer.

The part which gains my appreciation is for the effort put behind the pictures and also the video trailer. The main feature of the book is visual story telling, which in common terms mean, half the book is for photographs, which are supposed to improve the impact of story telling.

But my personal opinion is the pictures didn’t speak to me, despite being a wonderful work, as much as the pictures in Jonathan Livingston Seagull or the Little Prince.

If you are into exploring dystopian worlds you might try this and appreciate it better than me!

Co-owner of the site
Lyrical Delights

Helped publish the book “Through the Mist”
(A Collaborative venture)

Blogged a post everyday through the year 2016. For most of the year, the posts were in this sequence and there were deviations now and then…